I just had a look at the most recent BP Statistical review of World Energy. As usual it makes interesting reading – condensing the world’s energy appetites into a bite-sized summary. In my work, I am engaged with modelling people’s behaviour with respect to the use of energy in the presence of various contextual factors, such as what other people are doing, government policy, their own beliefs about climate change amongst others. A large part of this is concerned with their adoption of technologies to facilitate less carbon intensive energy use. Examples of this might be adoption of PV panels on their roof (of which more in a future post), adopting heat pumps to heat buildings or adopting smart controllers to use electricity when it is being generated in abundance. All this goes hand in hand with the current drive to incorporate more renewable generation technology onto the grid.

So, reading the summary report, I was struck by the graphs on page 42 – reproduced below.  Figure 1 shows the fraction of the world’s energy consumption generated by each primary fuel. The amount produced by renewable sources is a small fraction. In my area of work, we are used to reading about the positives in the accelerating adoption of renewable technology, but this is a sobering reminder that there is still a huge way to go if we wish to robustly decarbonise our energy diet.  The graph indicates that 13% of our total energy consumption was produced by low carbon means (Renewables, hydroelectric and nuclear), with the rest coming from Coal, Oil and Gas.  The hydro and nuclear fraction seems to be fairly stable over the time period considered (1987 – present) with the renewables fraction increasing, but to only 1.9% of the total in 2012. 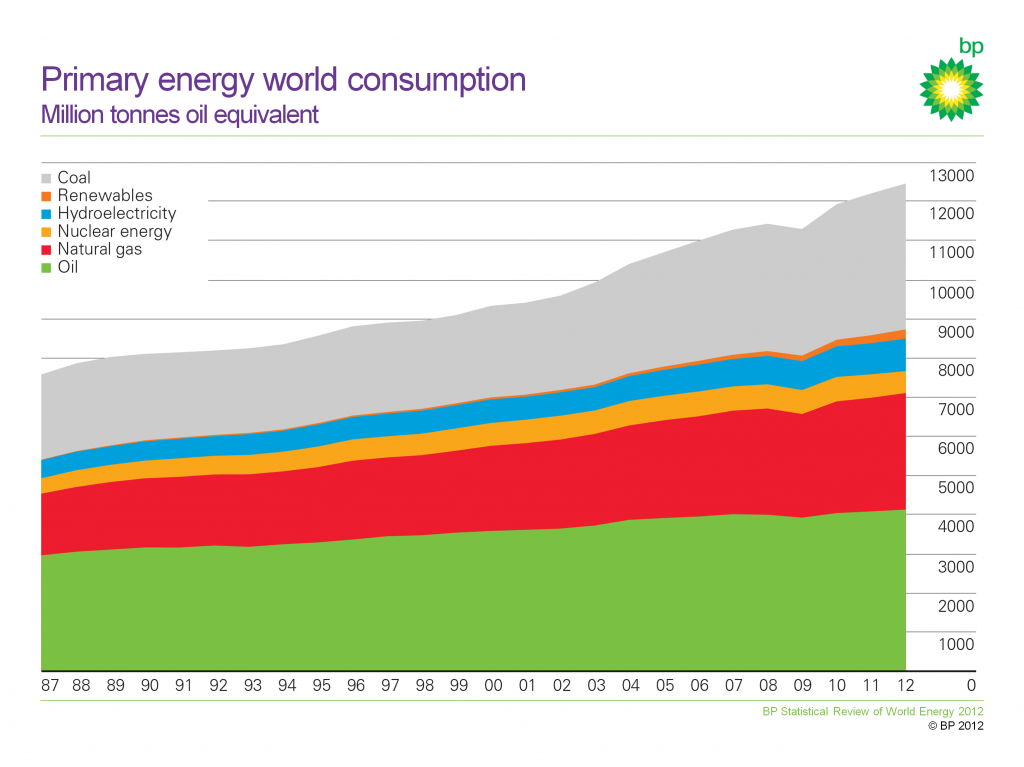 This brought home to me once again the enormity of the task of decarbonising energy use.  My work focuses on smart use of microgeneration and demand balancing in the domestic context in the UK.  While I try to keep an eye on the large scale context, I am inevitably focusing on a fraction (electricity demand) of a fraction (domestic) of a fraction (UK) of the energy consumption of the world.

Even within this small and relatively focused area, the issue of scale rears its head time and again. A rapid increase in technology takeup might be observed in households, but what is the effect at the town/county/country level? The rate of adoption for a technology might be high, but what are the absolute numbers of adoptees? The increase in generation capacity in households might be threefold, or even tenfold, over a year but still represent a tiny fraction of a percent of total generation. How to effectively model this and present results in a fashion that is as unbiased as possible is a recurring nightmare.  Inevitably, questions of scale occur throughout the modelling exercise – what scale of user should be modelled (household, office, factory, blast furnace…), what scale of generation (domestic PV, small wind farm, medium gas plant, DRAX…), what geographical scale (neighbourhood, district, county, country, continent…) and over what timescale (you get the picture…).  All have interesting characteristics and questions and interact, but not in a simple “just scale that up” way – usually via a complex and hard to predict interaction – with some mechanisms being present only at certain scales. For instance, investment strategy isn’t very relevant at the minute-by-minute timescale, but the ability of plant invested in to satisfy momentary demand is. Similarly, the day-to-day habits of a household might not affect the geographic planning of gas network reinforcement, but a shift en masse will.

When modelling energy scenarios, we will continue to grapple with this.  In debates around energy policy and climate change, arguments at mismatching scales are often pitted against each other.  My own modelling work has shown me that conclusions drawn at one geographical resolution can be unjustified when the analysis is performed at a different resolution.  It can be hard to make the point that the argument being put forward does not hold at the scale under discussion.

Other than to highlight the current situation regarding fossil fuels vs. low carbon generation at the world scale, my purpose in writing this short post is to make a plea for careful statement of the scale and resolution used when analyses are undertaken.  Even better, an analysis of how robust the results are to scale change. In some cases, this will be as important as the results presented.

Acknowledgement: terms and conditions reproduced from report : “Quoting from the review – Publishers are welcome to quote from this review provided that they attribute the source to BP Statistical Review of World Energy 2013”